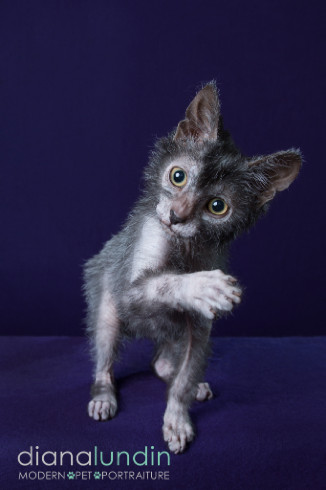 Channing is a Lykoi, a new breed of feline capturing the attention of the cat world. I had the privilege of meeting not just one but three Lykoi cats at the Kat Knappers Cat Show last weekend in Arcadia. Lykoi comes from the Greek word for wolf and the felines have a decidedly lupine appearance. Not lupine, they totally look like little werewolves.

Now I've never shot a cat show. The veteran photographers produce exquisite images and they are very specific. I don't know what all the specifics are. I turned to my cat photography mentor and he gave me great advice but mostly I had to rely on what the owners wanted.

This was both Channing's first show and his owner's first show. Jayne Harrower is the only California breeder of Lykois. Now Lykois are not a designer cat. They are a natural mutation of a domestic cat. As one of the International Cat Association (TICA) judges said, "It's a breed you don't have to feel guilty about." 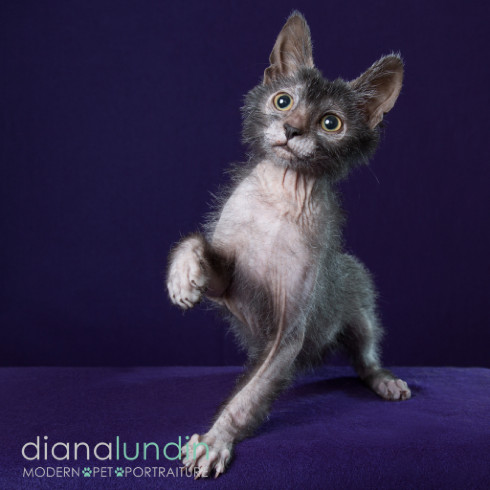 Brittney Gobble saw my photo of Channing on a Facebook group. She wrote, "My husband (a veterinarian) and I are the first breeders, and the ones that have established the breed. They are called 'Lykoi', based on the greek word for wolf, so 'wolf' cats. They never grow an undercoat, and the outer coat molts several time a year. They are a natural mutation from a domestic short hair, so they are not a designer breed. They are extremely healthy! All our breeders are under strict contract to not place any of the kittens intact without our permission, as we will not risk adding to the shelter population (we do a lot of shelter work, and while pedigree pets have their place...breeders and pet owners need to be responsible)."

And she thought my photo of Channing was a good representation of the breed. Blush.

Lykois are partially hairless; they have no hair on the underside of their bodies and no hair on the ears, nose, and around the eyes. They are bred with black cats, usually, and it's the roan color that helps distinguish them. Roaning is the mixing of white and pigmented hairs that do not turn gray or fade as the animal ages. Channing was molting at the time of the show so his fur was more sparse than the Lykoi that was winning in the color category. 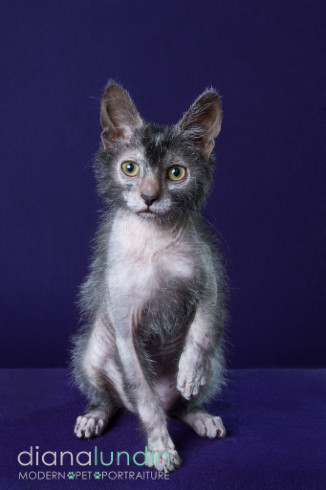 This article by Ian Chant is a good overview of the Lykoi.

The Lykoi are aiming to gain championship status in 2016. They are currently a preliminary new breed and go to the shows so that they judges can become familiar with the breed. By 2015, the Lykoi breeders are hoping to advance to new breed. Once they attain championship status, they'll compete against all the other breeds of cats. The standard for the Lykoi is being developed but color and hairlessness are a couple of the big criteria. They must have roaning and they have to have a hairless face mask.

The current standard eye shape is walnut. One of the judges said, "Round is too sweet. You want it slightly oval to scare the bejeezus out of you."

The Big Order in In!