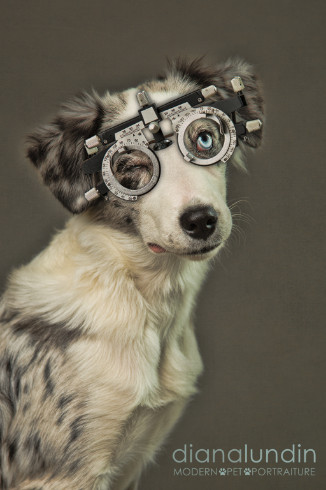 I met Luna (and her brother Beemo) at my latest Maxwell Dog ice cream social. She was four months old then and I was absolutely mesmerized by her Border Collie blue eyes. Her dad, Chris Nguyen, is a dog trainer and Beemo, though not Luna, had tricks you would not believe.

I had an idea of a shoot I wanted to do. I had been preparing for this photo shoot for quite a while. It involved an eye chart, a pair of trial glasses, and a dog. When I finally got everything in place, I contacted Chris to see if he and Luna would do the shoot -- those eyes, you know -- and he was amenable.

Trouble is, though trial glasses are quite accommodating to humans, they aren't so accommodating to canines. And when you're not even six-months old, you don't want to be wearin' no glasses, no sir. So Luna wearing glasses was a non-starter. Oh, we got tons of Luna being Luna but I also brought along a few other props because when the chief honcho is a dog trainer, you think it might be easy to slip in a few. I had a fez I bought a while back and I threw it in my camera bag just in case along with a few other things.

Well, we ended up photographing Luna in the fez and I got Chris to hold the glasses so I could piece them together later.

My eye chart didn't work but it didn't matter. Once I added in those glasses in Photoshop, well, less is more, people. One reason it worked so splendidly was because I had one photo of Luna with one of her eyes closed. How lucky was that?

The trial glasses photo became, "When you close your right eyes, which do you see better, A or B?" It was simple and I loved it.

Next, I decided for the fez photograph, Luna needed to be in a Moroccan scene. Yes, a lot of photographers won't do composites on anyone else's images but their own but I haven't crossed Morocco off my bucket list yet so I licensed a stock image. And suddenly, Luna was wearing a fez in a Moroccan-scape.

And just because there was one other image laying around that I liked, I bought another stock image of a forest. What it had going for it besides being slightly spooky was that there were no dappled rays of light streaming down through the foliage, which would make me have to create the same pattern on Luna and that just seemed hard. Compositing is hard enough. I am a huge fan of Joel Grimes' work and love how he composites images. And I watched Richard Sturdevant's tutorial on how he composites an image and it is just mind-blowing, the amount of detail he adds in.

To sell a composite, you've got to get the tones right and the light right. They do have to look like they could have come from the same place. For the forest, I darkened Luna so she was the same tone and made it more dramatic. I also flipped the image so the light on her would be coming the same side as on the trees. And I cropped her so she was dominant and by doing that, I didn't need to recreate a shadow after cutting her out from the gray background she was photographed in and plopping her in the forest.

With the Moroccan scene, I made her dominant again but kept in enough of the background of Morocco so you could really see the Islamic architecture, which is so beautiful. And then I amped up the colors with a little tone mapping. Actually, if you asked me how I did it, I don't think I could tell you. A little of this, a little of that.

Now stock images come in nice and sharp. So to sell the scene, you have to not only get the tones and light close, you have to blur out the background because in photography, the background gets rendered out of focus when the subject is close to the camera. Hey, it's physics. So you can tell the mark of a really bad composite when that detail is left out and it just doesn't look real.

I'm really excited about these three images. It seems like Luna has been traveling a lot, hasn't she?

I'm Diana Lundin, I'm a Los Angeles pet photographer, and I want to photograph your dog... or cat. Think of the places they can go. And I'm sure we'll all be perfectly content if it's just on your bed. 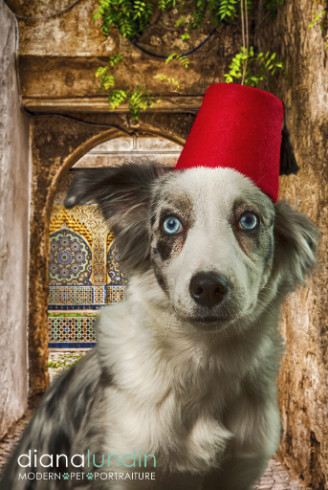 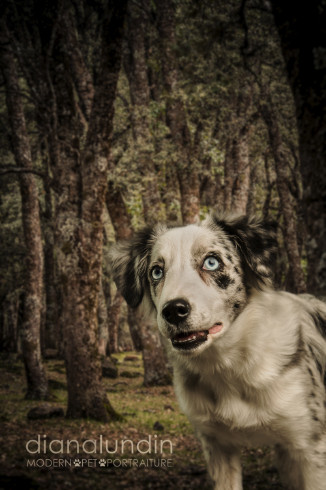