I first met Finny two weeks earlier at my ice cream social photo shoot with DogVacay in Santa Monica. What struck me was how incredibly expressive his eyes are. Almost human. They revealed a little shy being behind them and yet he was obviously enjoying his doggy ice cream. His moms, Tara and Yvonne, had him dressed up in a little T-shirt and I thought now here is a dog with great eyes and is used to wearing clothing... why not make him my super hero model?

Now there are a lot of super hero dog photos out there. The first one brought to my attention was Australian photographer Serena Hodson's photo of Ralph. It's brilliant. I saw another one recently of two dogs out in an alley wearing their caped crusader outfits and I wish I could remember who created it but I can't -- if I ever find it again, I'll post it.

What I wanted to do with mine was make it seem dark and bleak yet heroic and still maintain a graphic quality. So I contacted Tara and she was totally up for this photo shoot.

I had acquired the backdrop and I must say I was disappointed with its quality... you look at it and it wrinkled, which caused uneven lighting. It was very reflective and a thin vinyl. But that's all I had to work with. The generic child's cape, mask and cuffs were perfect... the neck opening had to be cinched a little to make it fit Finny better.

So with my lighting, I had a gridded beauty dish pointed directly at Finny (it was always my intention that he would be looking sideways and up), then a gridded light to where I wanted his face to be... and finally a gridded stripbox on the background. That would all provide the dramatic lighting I was looking for.

Finny was a great model. Yvonne stood behind him and moved his cape so that it was blowing in the night breeze. The fur on the top of Finny's hair was combed back, making it, too, appear to be windblown. And Tara was in front of Finny, to my side, with a treat in her hand to get his eyes in the direction we wanted.

And it all worked!

Because the backdrop was pretty awful, in Photoshop I deepened the black of the buildings, lightened the moon, then added my own midnight blue sky with stars... the real sky of the backdrop was just too difficult to work with. And I love the results.

Now is this a heroic dog or what? Finny was a rescue dog and has been in the company of Tara and Yvonne for three years. It is safe to say they absolutely adore him. He is so sweet, so game and really behind those beautiful eyes, shy and stoic. Wonderful photo shoot. 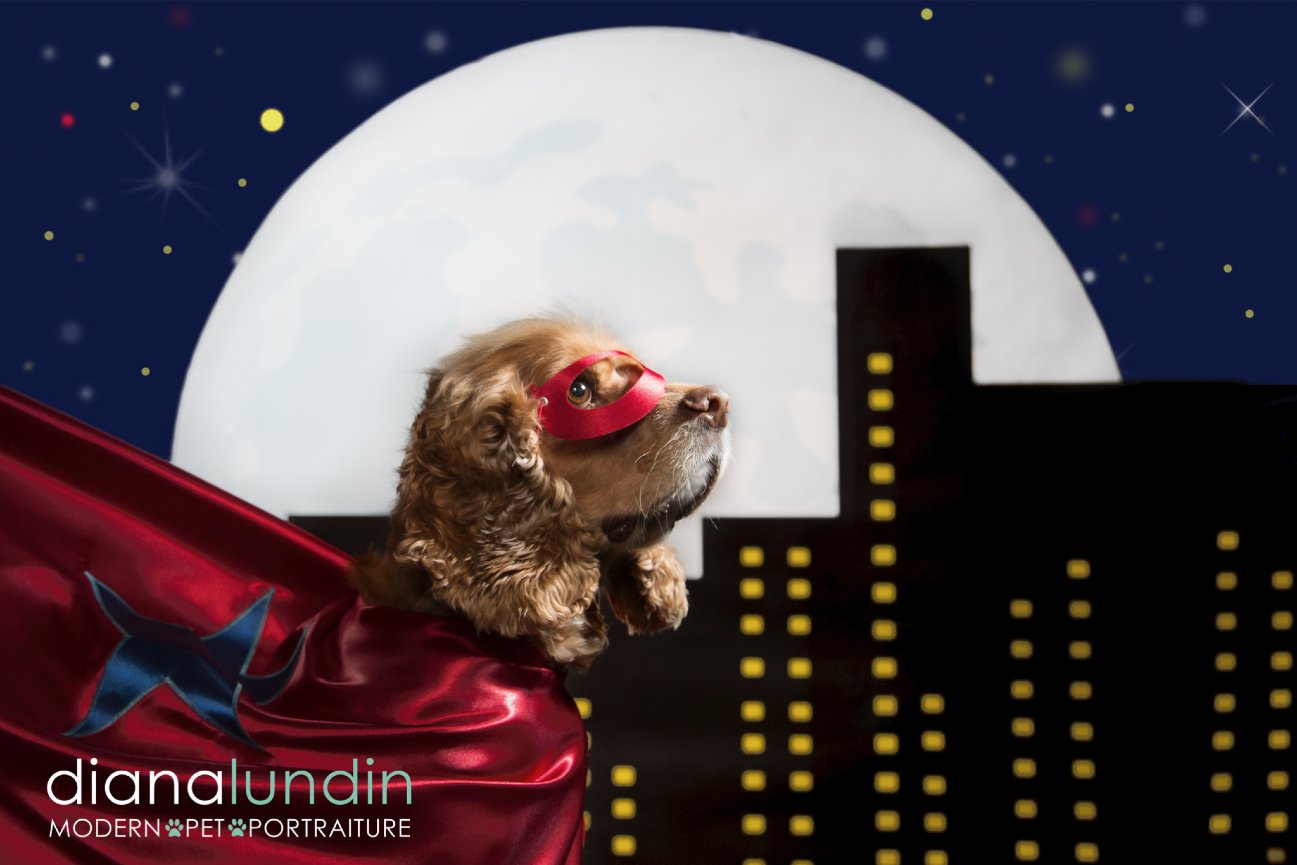 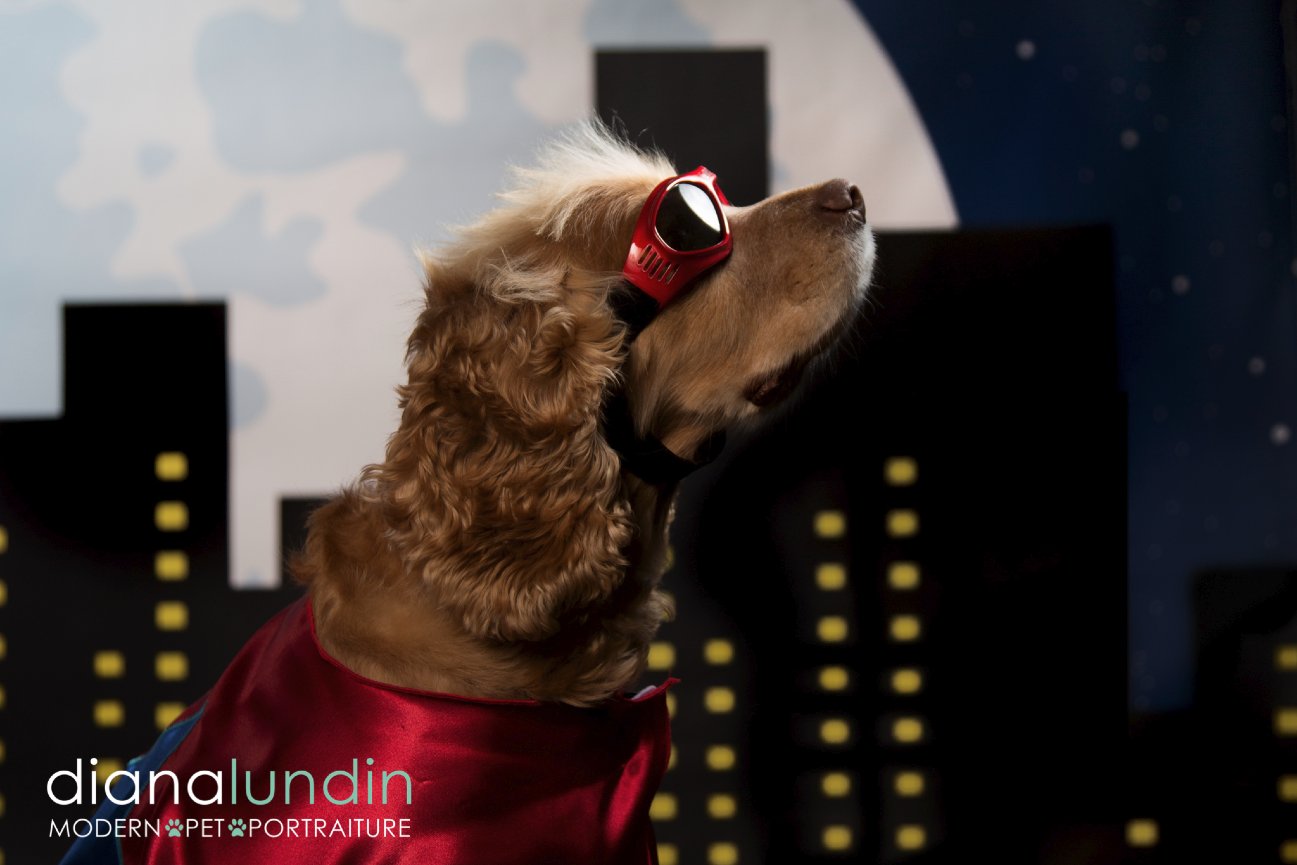 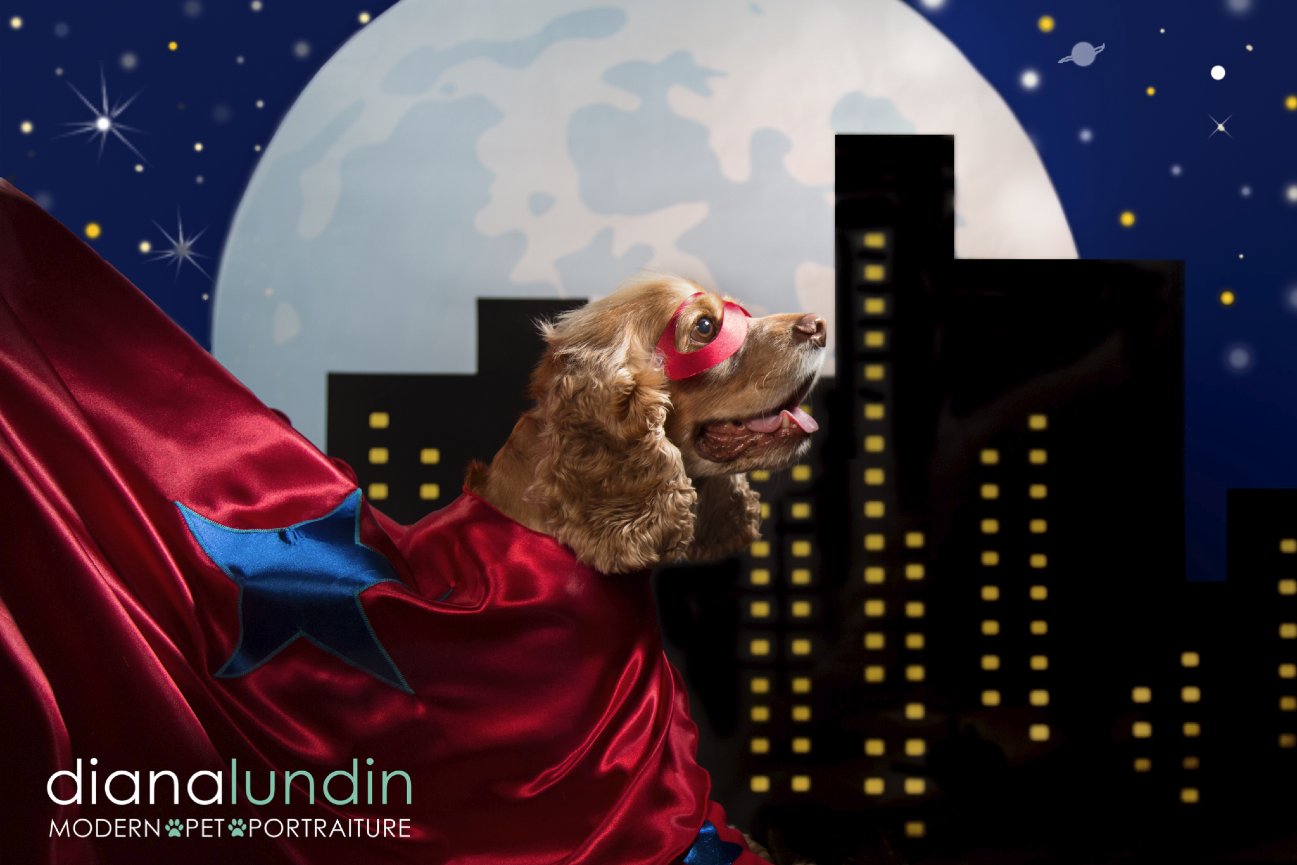 I Love L.A.! The Dog Photo Session at the Los Angeles County Museum of Art

My Pet Photography Identity -- What Keywords Fit My Photos

The Birth of Luna -- A Composite

Getting Ready for Halloween